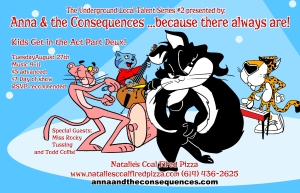 “Kids Get in the Act, Part Deux” marks the second event in “The Underground Local Talent Series” organized by Anna Paolucci.

Anna & the Consequences have invited lesser known and undiscovered talent in and around Columbus, Ohio to perform live with the band, solo, and with Anna & the Consequences supporting the guests performing their own material. This series offers local talent of all ages, levels and backgrounds stage time, allowing them the experience of presenting themselves and their material in a live setting, and to work with a variety of seasoned musicians.  This unique event also provides the audience a rare opportunity of great (and potentially magnificent) performances. Featured at the two-hour show August 27 is 12-year-old Miss Chloe “Rocky” Tussing playing drums. Additionally, she will sing a song or two, a cappella. Due to her talent, Rocky was selected this year to spend a week in July at the Girlz Rhythm N Rock Camp, an overnight girls camp for ages 8-18, where she took workshops on songwriting, drumming, voice techniques, sound equipment, gear, performance, stage direction, mask making, making hand drums, art music projects, and more. This will be her first performance since her experience with the Girlz Rhythm N Rock Camp.  Full grown adult Todd Collis will accompany the band on guitar, adding his tasty jazz and blues influenced licks, solos and vocals to the mix!

Miss Chloe “Rocky” Tussing”Miss Rocky Tussing is a bit of a weirdo. She does things that are just plain funny, random, and absolutely bizarre, but she mostly does them intentionally and doesn’t really care who thinks what about her creativity. People say she looks like Disney’s Raquel “Rocky” Blue – so, she’s known as Raquel or “Rocky”. She is 12 years old, going into 7th grade –junior high *(sigh)* in Columbus Ohio, but her school only goes up to 8th grade, so she will have to find a high school interestingly freakish enough *(sigh)* to be worthy. Rocky LOVES to play music, and loves most music in general. In fact, she attended a rock camp this summer. But the one thing she surprisingly has her mind set on, is dancing. When she grows up, she wants to be a professional dancer. Still, she feels really passionate about music, even though she has a SEVERE case of stage fright syndrome. She’s workin’ on it, and that’s all that matters!”